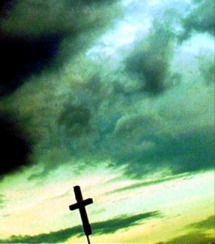 “In the beginning God created the heaven and the earth.” (Genesis 1:1)  God also created man in His own image, “...male and female created he them.” (See Genesis 1:27)  God created man with a mind so that he could know God, emotions so that he could love God, and a will so that he could obey God.  Man was created perfect and enjoyed fellowship with God.  God gave Adam and Eve one rule – they were not to eat of the fruit of the tree of the knowledge of good and evil, “for in the day that thou eatest thereof thou shalt surely die.” (See Genesis 2:17)  Adam and Eve chose to disobey this command and immediately died spiritually and began to die physically.  They knew that they were naked, and they were afraid and ashamed.  They were also separated from God because of their sin.  Adam and Eve tried to make their own coverings of fig leaves.  But God did not accept this.  He killed an animal, and made clothes from its skins and put the clothes on Adam and Eve. (See Genesis 3:21)  God wanted them to know that they could not do anything to make themselves acceptable to Him.  He wanted them to understand that He is holy and righteous, and that He demands death as the payment for sin.  In the same way, God only accepts us if we repent of our sins and trust completely in the way of salvation that He has made for us.  We cannot provide a way of salvation for ourselves.  We deserve only death.

Cain and Abel both brought offerings to the LORD.  Abel brought a sheep, killed it, shed its blood, and offered it upon the altar.  Cain was a gardener, and  he brought of the fruit of the ground.  “And the LORD had respect unto Abel and to his offering:  But unto Cain and to his offering he had not respect.” (See Genesis 4:4,5)  Why did God accept Abel’s offering and refuse Cain’s offering?  Abel came to God the way God had said to come.  Cain tried to come to God his own way.  God will not accept us if we try to find our own way to Him.  God has told us that we must come to Him through faith in Jesus Christ.  That is the only way.

When God destroyed the world with a flood, He saved Noah and all his family alive in the ark.  Why?  Was Noah better than all the other people on earth?  No.  Noah and his family believed that God would send a Deliverer, a Saviour, to save them and all the world from sin; Noah demonstrated his faith in God by obeying God and building the ark.  God had Noah make only one door into the ark.  The ark was the only place of safety, and the door was the only way into that place of safety. (See Genesis 6 and 7 for the story of Noah and the ark).  In the same way, Jesus is our door into the place of safety.  We can only enter into eternal life through Him.  He said, “I am the door: by me if any man enter in, he shall be saved….” (John 10:9)  Man can only come to God according to God’s will and plan.

Do you remember what difficult test God gave to Abraham?  In Genesis 22:1,2, God told Abraham “Take now thy son, thine only son Isaac, whom thou lovest, and get thee into the land of Moriah; and offer him there for a burnt offering upon one of the mountains which I will tell thee of.”  Abraham responded by trusting God and obeying Him.  Once Isaac was bound and placed on the altar, he had no way to save himself.   It is  the same  for  us.  We are hopelessly bound by Satan and sin.  We cannot save ourselves.

God called Isaac Abraham’s “only begotten son.” (Hebrews 11:17)  Jesus was the “only begotten Son” of God. (John 3:16)  Abraham, Isaac’s father, willingly gave his son as an offering to God.  God willingly gave His Son Jesus as an offering acceptable to Himself for our sins.  Though Isaac was spared from death, God said that he was raised again from the dead “in a figure.” (See Hebrews 11:19)  Jesus Christ was raised from the dead for our justification, that we might be made righteous in God‘s sight through faith in Jesus Christ‘s death, burial, and resurrection. (See Romans 4:25)

God provided a way for Isaac to be saved from death by providing a ram.  This ram was caught by his horns in the thicket.  Why did it have to be caught by its horns? (See Genesis 22:13)  If  the ram were caught by any other part of his body, he might have been injured.  God required a perfect sacrifice with no blemish, injury, or sickness.  Jesus was the perfect Lamb of God which came to take away the sins of the world.  He had no spot or blemish. (See I Peter 1:19)  In Him was no sin.  He was the only substitute God would accept to take our place.  We deserve to die and be separated from God for ever because of our sins, but Christ died in our place.       The passover was another incident that pointed ahead to the death of the Lord Jesus Christ.  God instituted the passover when He punished the Egyptians by killing the firstborn child in each household.  There was not an house in Egypt where there was not one dead.  But in Israel there was not one house where someone did die.  Why?  Were the Israelites better than the Egyptians?  Did God like the Israelites better?  No, “God is no respecter of persons.” (See Acts 10:34)

Jesus too had to die, “when the fulness of the time was come.” (See Galatians 4:4)  He was a perfect lamb, sinless and blameless before God.  He kept the whole law of God and never broke it even one time.  When He died on the cross, Jesus shed His pure blood to cleanse away our sins.  But just knowing that Jesus died for your sins is not enough to save you.  You must “apply His blood.”  You must agree with God that you are a helpless sinner, unable to do anything to save yourself.  You are condemned to death and eternal separation from God for ever in the lake of fire because of your sins.  Only God can make a way to save you, and He has made that way through His Son Jesus Christ, the only Saviour for every man, woman, and child everywhere in the whole world.

While the Israelites were wandering in the wilderness, God gave them the Ten Commandments.  Why did God give them the Ten Commandments?  Were they a set of rules that God wanted the Israelites to live by?  Did God think that the Israelites would be able to keep these commandments?  No.  God gave the Israelites the Ten Commandments to show them that they were helpless sinners under the condemnation of death.  The Ten Commandments, or the law, is God’s standard.  In order to be acceptable to God by keeping the law, one would have to keep the law perfectly. Breaking the law only one time is one time too many.  (See James 2:10)  No one but Jesus has ever perfectly kept God‘s law.  No one is able to keep it.  God did not just give His law to show the Israelites that they were helpless sinners and could not please God by their own efforts.  God gave His law to show the whole world that they are guilty before God.  Romans 3:19,20 says that God gave the law “...that every mouth may be stopped, and all the world may become guilty before God.  Therefore by the deeds of the law there shall no flesh be justified in his sight: for by the law is the knowledge of sin.”  Man is not justified by the law.  The law shows man his sin.  The law is not a way of salvation; it is a way of condemnation.  There is only one way of salvation.  That is Jesus Christ, the way, the truth, and the life. (See John 14:6)

Because the Israelites were sinners and sin had not yet been completely paid for by Jesus Christ, the Israelites could not dwell in God’s presence.  God cannot look upon sin.  But God is loving, merciful, and gracious.  He loved Israel and wanted to live with them so He instructed Moses to build a tabernacle where he could meet with His people and forgive their sins.  In this tabernacle were two rooms – the holy place, and the holy of holies.  In the holy of holies was the mercy seat where God dwelt among His people and where the Shekinah glory of God did shine.  No one was permitted to enter this holy of holies except the high priest alone, and he could only enter once a year with the blood of a lamb which he sprinkled on the mercy seat.  When the high priest sacrificed this lamb and sprinkled his blood on the mercy seat, God forgave the sins of the Israelites for the year that had just passed. (See Hebrews 9:5-10)

But the blood of animals could never pay for sin.  It was only a picture of what the Lord Jesus would one day do for us.  When Jesus offered Himself as the sacrifice for sins, Jesus paid the price for sin once for all.  The Bible says, “...by his own blood he entered in once into the holy place, having obtained eternal redemption for us.” (Hebrews 9:12b)  And all those who repent of their sins and believe in Jesus Christ are “sanctified through the offering of the body of Jesus Christ oncefor all.” (See Hebrews 10:10)

Behind the curtain separating the two rooms in the tabernacle was the holy of holies.  This curtain reminded the Israelites that they were sinners and were separated from God.  No one could come into God‘s presence lest he die because sin had not yet been completely paid for.  But when Jesus died, the veil of the temple between these two rooms was “rent in twain from the top to the bottom.” (See Mark 15:38)  The price of sin had been paid completely, once for all.  Man no longer had to stay on the other side of the curtain.  Through faith in Jesus Christ and His shed blood on the cross of Calvary, you can come directly to the Father.  Jesus is the only way.  Will you trust in Him for your salvation today?


Though this article is a product of my own personal study, the idea for this article and the order of story illustrations came from Firm Foundations Creation to Christ, Student Outline booklet © by New Tribes Mission.